1) Please tell us a few words about you and what motivated you to participate in the competition of Arxellence 2. Did you ever undertake/design a similar project (CBD) in the past?

a. Tell us a few words about the team that worked on the proposal.

ALE architects is  based in Chongqing, China. An individual practice was born from many collaborations with architects and companies from different countries between Europe and China. A satellite office is in constant change, the team is  open to new challenges and ready for further  collaboration with counterparts.

In this specific case and competition, I was trapped in a room hotel somewhere in Kunming, China during a forced quarantine. What I had was  A laptop, a pen, a window and 14 days isolation. As a result, I brought a great personal meaning for this competition.

About the practice … considering any project in different scale, swinging between the reality and complexity of the private sector and the competitions. non-profits projects also provide with an opportunity to be really creative in terms of construction technics, materials and economic constrains.

b. Did you ever undertake/design a similar project in the past?

Yes, in Kaiserslautern, Germany in 2012 I believe. It was part of the competition EUROPAN 2012 “productive city”. Similar program and scale but surrounding by a very different background and heritage. 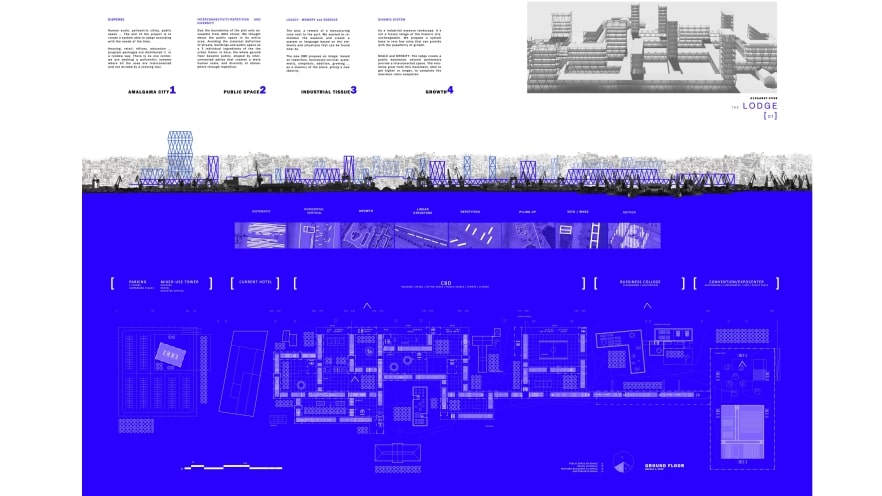 2) Could you give us a description of your proposal? How did you approach the project and what was the main idea of your design?

a. Describe in a few words the structure of the CBD you designed (the main characteristics of your synthesis).

b. Describe the main idea of your proposal.

/essence/ The understanding of the port from two dimensions. From the top, all the situations that there are taking place, actions like repetition, piling up, growth, systematic, linear, addition …. From the waterfront, the big tension created by the vertical steel structure of the cranes and the massive horizontal shell from the boats.

I wanted to be a part of this industrial landscape, another layer between the port and the city behind.

/hierarchy/ No main center. The whole site is appearing as a mix-used tissue where working, living and leisure coexist together. Using microscale of random functions and the repetitions of a primitive archetype “the lodge” we conquer and frame the public space, giving a new scale, a human one.

/agora/ Agora as a design tool. Avoiding the standard definition or urban tissue determinate by the infrastructure, roads, public space, plots and buildings we take something from the past and reuse in a different way, a new living organism where the public activity and human scale become the main actors.

Try to democratize the architecture, offering the possibility of customize the plazas by the people who will live and work there.

/time/ A flexible system. Using scale, density and big data we propose a tool more than a frozen image to control and adapt to the new demands of Thessaloniki.

The CBD again, as an echo of the industrial port in front.

/ruins/ Several industrial heritages disperse all along the plot. Buildings from different time, construction technics, materials and stage of conservation. No universal way of approaching a ruin, only consider it as a new possibility.

c. What difficulties did you face?

None. In this competition the proposal appeared in a very natural and simple way, not big difficulties were faced. Came almost immediately.

d. What would you say is the most innovative feature of your proposal? 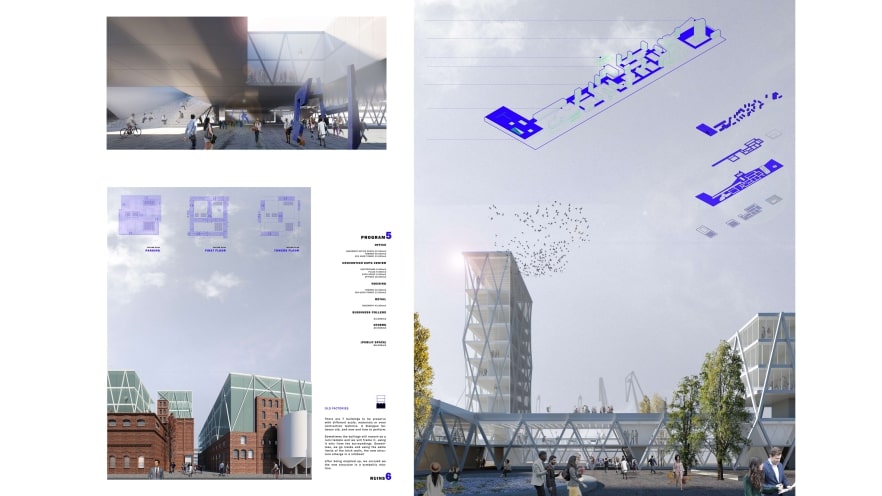 3) What do you think made your idea stand out and why? What are the experiences you gained from the competition of ArXellence 2?

Any competition gives you a new opportunity to think and develop new solutions for current challenges. In this particular case, to be back on time to Thessaloniki, to rethink and learn again from the past and give it a new try, to think big using small and come back to essential.

To mention also the sharing with jury, another architects and in particular with the organizers.